Never an autumn precious metals an miner rally has been more improbable than in 2022. The July miners crash was only the first stage. The month ended with miners barely following the gold recovery lasting till August 12. The sentiment for precious metals turned sour again, especially last few days as PR's from Jackson Hole don't reveal any softening of the pace of FED rate increases. Those seem now echoed by a similar, though much delayed, stance taken by the ECB.

We had barely one Comex close above $1800/Oz. The rally failed on Aug 15 and gold is on a downward slope again. The USD rally, driving the Euro below parity for the first time since 2000 underpinned the gold slump. The gold year-to-date graph adds its August chapter:

The 200 dma has flattened as the effect of the February - March rally (upon the invasion of the Ukraine) has worn off. the shorter 50 dma has been sliding since the end of May. Gold once more posts below both moving averages. This raises no hope for any decent autumn rally.
In the late 1970's, the inflation genie was also out of the bottle with interest rates rising likewise, however that didn't withhold the gold rally which would eventually make the yellow metal peak at $850/Oz in Jan 1980 (This peak level would hold for almost 28 years).

Last months article "The July Miner crash" already revealed how miners reluctantly followed the precious metal recovery late July. We have seen no improvement in August, with the HUI again breaking below 200. As mentioned earlier, this was its level in June 1996, with gold than quoting $389/Oz. Lower average grades in today's mines result in higher production costs per ounce, even without the current inflation now squeezing margins.
Even though gold still quotes above its July 21 bottom, the HUI miners index broke below that level, now permanently staying below 200. Never the outlook has been so dire as it is today. There seems no perspective for any autumn rally worth its name.
The regularly updated Gold Miner Pulse page mentions the HUI/Gold ratio as a synthetic indicator of how poorly miners are doing. Hereby I add the year-to-date graph of HUI/Gold:
Little above 0.10, the HUI/Gold ratio now is approaching the level it reached at the end of the four year gold bear market by Christmas 2015. Back then, the yellow metal bottomed at 1050$/Oz.

How individual miners are doing since initiating the follow up in Nov 2010 (now almost 12 years ago) is monitored on the Miners' Performance page. The 'break even level' crept up into the top quintile again, meaning that less than 20% of the miners are still above their Nov 2010 level, even though gold is well above its 1342$/Oz starting level from back then. This is illustrative of the fact that miners are poor investment vehicles, unable to warrant any of the desired 'optionality' at rising gold prices over the long haul.

The linear regression between the HUI miners index and the gold price which was valid since Aug 2018, has come under severe strain since las... 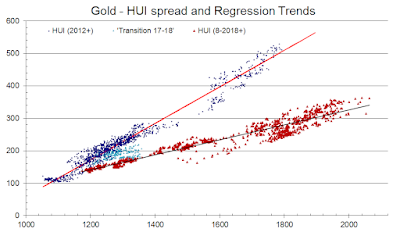